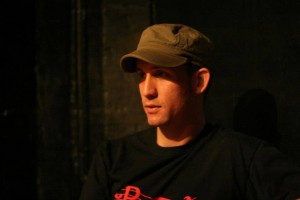 Cologne born and raised Dj Catweasel soon discovered music to be THE passion for his entire life. „Don’t believe the hype“ by Public Enemy was his way out of common airplay music back in 1988 at the tender age of 11. From then on Rap and Hip Hop was the first choice to be played in his walkman. But it took 7 more years until he was brought to a Techno party at the Warehouse by chance. Soon he focused on House and Techno and left Rap and Hip Hop more and more aside. It was not the music that caught his interest in the first place. It was the technique the Dj used. How was it possible to beatmatch two tracks that good you do not even realise the next record is already playing? The result: The first pair of 1210s were bought in 1996. Musically he was into Jeff Mills, Surgeon, Carl Craig and Plastikman (to name a few). The first public Dj Gigs came in late 1999, where he played in Bars but soon were followed by Club Gigs in cologne’s Artheater, Club Camouflage & Essigfabrik. In 2004 he was resident Dj at the Psycho Thrill parties and promoted his first Oldschool Disco and Italo parties called „Coca Disco“ in 2005 at the Lauschgift Club which is now the Reinecke Fuchs. At that time he looked back at the dance music history and found out that the 4-to-the-floor concept was already exciting in the late 70ies and early 80ies. Three years later he teamed up with two buddies to start the „Toutes Directions“ parties which took place at the Subway Club and the Gewölbe. Musically the party was about Oldschool Disco and modern House music. After having Gigs in Lille and Paris at that time the team broke up and the party was history. In 2011 he started his very own party at the Studio 672 called Spank! It should have been a party about Dance Music of the last 40 years, but it did not last longer than a year. During this time Catweasel met a lot of Promoters and Djs of the cologne party scene and somehow catched the eyes and ears of the 200-Club Promoters. After playing at one of their parties they introduced him to Liho of the Bergwacht-Crew. First bookings followed for Bergwacht where he turned into a Resident Dj in 2013, exactly 18 Years after he started djing. If he is a grown up Dj you better decide by yourself.